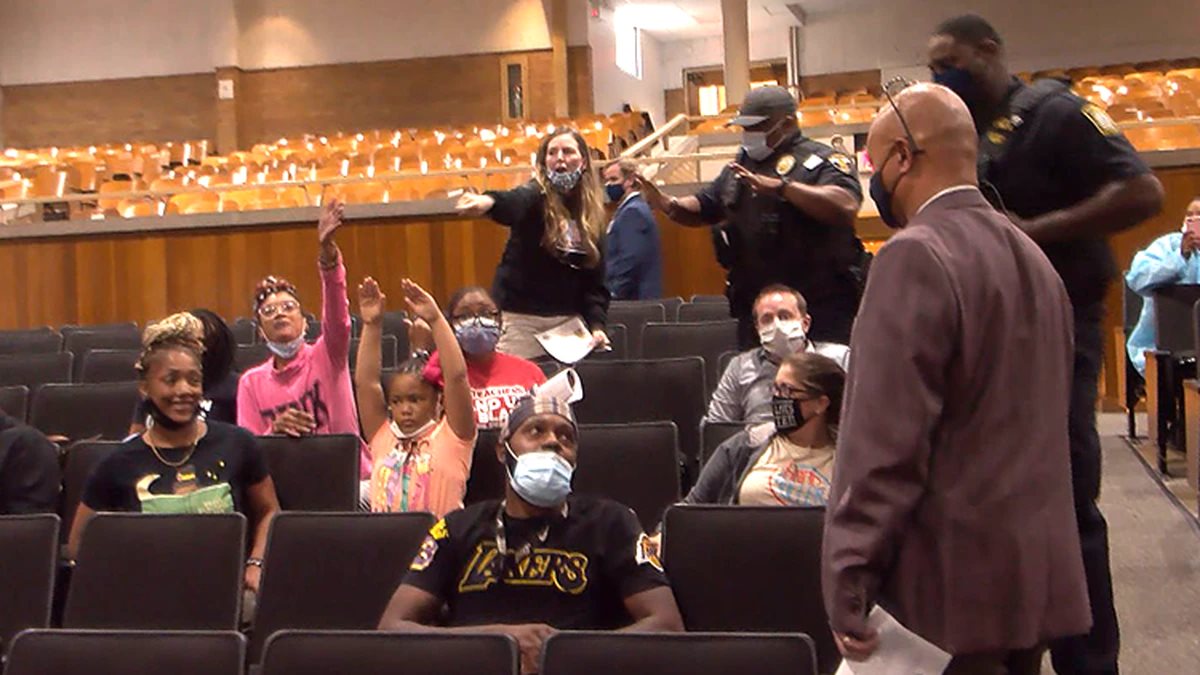 Photo description: A white JCPS administrator oversees the events from the background as Black officers are sent in to “calm down” and remove Black parents and students who had just been taunted by white supremacists. A white ally can be seen standing up and pointing in the direction of the white supremacist who had done the taunting.

This image reveals so much.

“This is why we don’t want police in our schools!” a Black mother can be heard yelling from the back of the auditorium. Meanwhile, an indignant white ally (me) shares what she just witnessed with the Black officers who had descended upon a group of mostly Black parents and students who had come to speak to the Board. They had been taunted by a female white supremacist (not shown) who was eventually escorted out of the auditorium, but by then, the board had adjourned the meeting and ordered everyone to leave, fulfilling the goals of the white supremacists who would prefer to shut down discourse than to learn about the harmful effects structural racism and bias have on our most marginalized communities.

I am pointing out the white female domestic terrorist who had threatened a Black woman sitting near me. Why did it take a white accomplice recounting the story before the Black officers would act on what the Black audience members were telling them all along? Prior to that, they were siding with the instigator and asking the Black families to leave. WHY DID IT HAVE TO COME TO THIS to get the white woman escorted out? Why did they still clear the entire auditorium when these families did not instigate it and only came to be heard?

Look at the young student two rows in front of me with her arms in the air. This is what Black children are taught they must do to stay safe when police are around. How can they possibly learn with police in their schools?

Not only do Black people NOT get the same benefit of the doubt and presumption of innocence that white people get, they are presumed guilty until proven innocent! JCPS’s student body is more than 50% non-white. THIS IS WHY WE DON’T WANT ARMED POLICE IN OUR SCHOOLS! #No2SROs